This week's stitch is the Beaded Hedebo Edge stitch.  Go over to Pin Tangle for a description of how it's done.
In a flash of inspiration I thought that the stitch would look great worked in metallic thread as tinsel on a Christmas tree, so that is my offering.
The end result isn't as good as I envisaged.  As I didn't have beads I thought that buttons could work, but I think the ones I used are slightly too big for the tree; and I haven't got the hang of French Knots, which were also supposed to take the place of some of the beads.  The metallic thread was a little tricky to work with as it was difficult to keep all the strands together.  But having said that I think it's a fair effort and I might have another go at it. I think it would be cute on the front of a Christmas card. 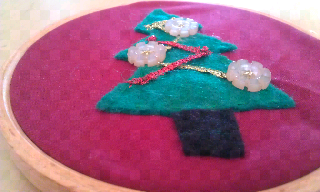 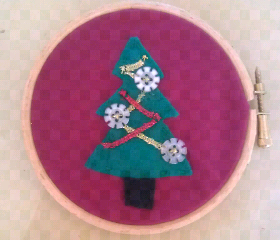 Thanks for stopping by. I'm always thrilled to get feedback and appreciate you taking the time to comment.

Mrs. B.
Cardiff, United Kingdom
Inspired by flowers and foliage, strong patterns and rich colours. Happiest when making something.